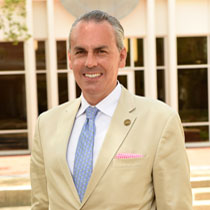 Jay began his education career as a teacher, coach, and administrator in public schools, then moving to The Elon School (NC) as Director of Admissions in 2006.

Berkeley Preparatory School is a Pre-K-12 day school with over 1,300 students in Tampa, Florida. A native North Carolinian with a BA in History from The University of North Carolina-Chapel Hill and an MEd from Elon University, Jay began his education career as a teacher, coach, and administrator in public schools, then moving to The Elon School (NC) as Director of Admissions in 2006.

From 2011-2019, he was director of admissions at Norfolk Academy, a 1-12 day school with over 1,200 students, located in the Hampton Roads region of Virginia. During his tenure he was a member of the school's senior administrative team, the Board of Trustees Education Committee, and was an integral part of the largest capital campaign in the Academy's history.

Jay and his admission team were responsible for $24 million in need-based financial aid annually, and twice rebranded Norfolk Academy by expanding tools and analytics to better understand key stakeholder interests and broaden platforms and effectiveness of internal and external marketing, especially via social media outlets.

Jay has served on the Virginia Association of Independent Schools (VAIS) Admission/Communication Directors Program Planning Committee, as well as the Southern Association of Independent Schools (SAIS) Accreditation Visiting Teams. He has been a part of EMA's Early Childhood Working Group, the Character Taskforce, and the G-32 Plus, which researched, designed, and implemented the Character Skills Snapshot.

Jay, his wife Emilly, and their three children enjoy traveling, spending time at the beach, and pulling for their beloved UNC Tar Heels.